A change of residence can be a very stressful life event for a person to go through, especially for a child. New home. New school. New peers. New pizza — covered in broccoli. These are a few changes that eleven-year-old Riley (Kaitlyn Dias) encounters in San Fransisco after her father uproots their comfortable life in Minnesota to take on a new business venture. Inside Out, the newest film from Pixar, follows the complex psychological workings of the adolescent girl during her difficult, frustrating, and often lonely transition. 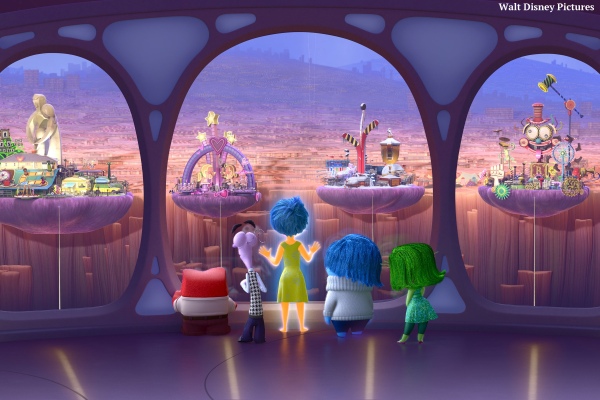 We see the world through the five characters in her head who control her emotional responses: Joy (Amy Poehler), Sadness (Phyllis Smith), Fear (Bill Hader), Anger (Lewis Black), and Disgust (Mindy Kaling). The vast majority of Riley’s memories and experiences thus far in her young life have been very happy. The globes holding her memories are mostly tinted yellow to indicate such a happy childhood, but after the move to San Fransisco, Sadness begins to turn some of them blue by touching them. The thoughts of her old friends in Minnesota, the memories of her childhood home, and the great times she had playing hockey can no longer be uniformly happy as they are in the rearview mirror and must naturally be affected by Sadness — her first pangs of nostalgia and loss. Joy, however, scolds Sadness for ruining the happy memories and attempts to stop her by taking the yellow globes and keeping them purely joyful. It doesn’t work though and Joy and Sadness are shot through a tube into Riley’s long-term memory, leaving Fear, Anger, and Disgust to control her emotions. Joy and Sadness journey through Riley’s mind on their desperate attempt to get back to the command center. They meet up with Riley’s imaginary friend Bing Bong (Richard Kind), travel through “abstract thought” and “Imagination Land”, and witness all of Riley’s core islands of personality shut down (Family, Friendship, Hockey, Goofball). Meanwhile, Riley becomes angry and withdrawn as Anger has taken it upon himself to control most of her responses. Joy and Sadness must find a way to work together to get back and save Riley.

Inside Out is a daring and visionary film by Pixar unlike anything that has ever been done before. It takes a very serious and complex issue, which looks at human emotion, behavior, thought processes, and child development, all parts of the human mind that no one fully understands yet, and turns it into a very relatable topic and a simple story for both children and adults to enjoy. It is the most emotionally resonant film in the Pixar catalogue and the studio’s best since Up, the film it most closely resembles as both were written and directed by Pete Docter.

Amy Poehler has the most lines and is really the heart of the film because of her relentless desire to make Riley happy again. She is excellent and it feels as if she stepped right off of the set of Parks and Recreation with Leslie Knope in tow. She embodies the same unbreakable optimism and determination here that made her character so lovable for seven seasons. Phyllis Smith provides a great contrast to Poehler’s character and seeing Joy and Sadness try to figure out how to work together to help Riley is the best part of Inside Out. The rest of the cast is good, but don’t really have enough to do; the great talents of Hader, Black, and Kaling feel slightly underutilized because they are not given enough lines to work with. Richard Kind is a great addition and creates a very likable and sympathetic character in Riley’s imaginary friend Bing Bong.

Inside Out proves to to be another massive success by Pixar that, unfortunately, just happened to come out on the heels of Jurassic World’s record setting opening and could go overlooked commercially. Although, that doesn’t seem likely because Inside Out is such an excellent film that both its critical acclaim and box-office success seem inevitable. It not only takes a chance by centering the film’s primary plot inside the mind of an eleven-year-old girl, but comes up with an ending full of emotional depth and truth that has the power to silence every hint of laughter in the theater and render its entire audience to sniffles and sobs. Pixar has done it once again and, along with its Japanese counterpart Studio Ghibli, has shown that it is still the best at creating entertaining children’s movies that are also capable of touching upon complex adult themes.