Melissa McCarthy’s incredible ability to seamlessly switch from self-deprecating to a self-celebrating, profanity-laden verbal assassin in an instant is the proof of her comedic genius and one of the main reasons Spy works so well with her at its helm. Writer/Director Paul Feig (Bridesmaids, The Heat) also wields a very tight script that strictly adheres to the plot without adding any unnecessary scenes for comedic effect; all the comedy here (which is abundant in every scene) comes naturally from the within the story.

McCarthy plays Susan Cooper, a CIA agent who has spent her entire career behind a computer aiding field agent Bradley Fine (Jude Law), a man she pines for although he is oblivious to the prospect of her as a romantic option. While tracking Rayna Boyanov (Rose Byrne), a Bulgarian born terrorist with plans to sell a small nuclear bomb through middleman Sergio De Luca (Bobby Cannavale), an unforeseen incident forces Susan’s CIA boss (Allison Janney) to send Susan into the field in order to stop the imminent terrorist threat. She is assigned several demeaning and stereotypical secret identities replete with characteristics such as “cat-lady”, “divorced single mother”, and “Mary-Kay saleswoman”. She plays these roles to perfection up until the moment she is forced to go rogue in order to get closer to Rayna, at which point she morphs into a sharp, quick-witted badass with a skill set and swagger every bit as dangerous as James Bond. When fellow CIA agent Rick Ford (Jason Statham) goes out on his own to bring down the terrorists, despite the fact that they know his face, he threatens to blow Susan’s cover and ruin the entire operation, making for some great exchanges between McCarthy and Statham, who overplays his machismo with a self-awareness that pokes fun at the very roles he has made a reputation on throughout his career. 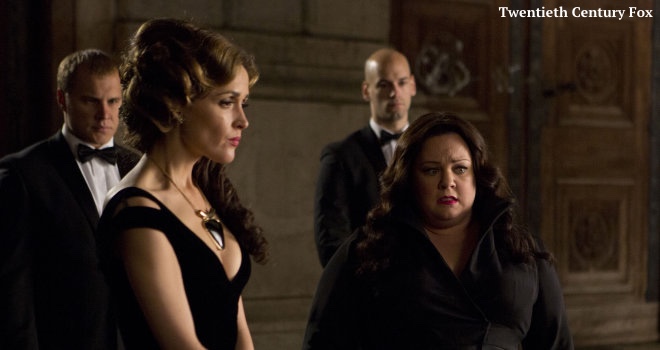 Rose Byrne is hilarious and fantastic, as always, in a role very similar to the character she plays in Bridesmaids, an icy, beautiful, and spoiled rich girl whose overconfidence and hard-shell exterior mask a deep seeded insecurity and desperation to be accepted; it is a role that should be exclusively given to Byrne as she has shown there is no actor in the world who can play it better for comedic effect. The supporting cast is equally great, especially Miranda Hart and Peter Serafinowicz, who, respectively, play Susan’s behind-the-scenes CIA best friend and her driver/sexually inappropriate Italian sidekick during the scenes in Rome.

McCarthy soars with Susan during the second half, where she gets to unleash one-liners, jabs, and spinning takedowns directed towards Rayna and the terrorists, Agent Ford, and anyone else who manages to get in her way. But there is great depth to be found in her character alongside the potent comedic chops. By sifting through the fake identities she is given out in the field, Susan is ultimately able to embrace her true identity as a formidable field agent and strong, independent woman.

Everything about Spy works from the tight script and comedic chemistry between the actors to the surprising plot turns and the well-executed action scenes. It has thrown its name in the hat for the funniest movie of the year so far. And if you have a problem with Spy it is probably the inability to believe McCarthy as a kick-ass and highly competent CIA agent, dangling from helicopters and taking out five men at once, which is entirely the point: Do not underestimate Susan Cooper.